Only Marshallian inefficiency? How a framed field experiment helps to identify another cause of the inefficiency of sharecropping contracts.

This post continues a series of notes from guest bloggers about papers presented at the CSAE conference 2012. Niels Kemper (University of Mannheim) summarizes the results of his paper about the effects of different type of contracts on real-effort tasks performance .


From the classical economists such as Adam Smith, John Stuart Mill and Alfred Marshall up to the day, economists are interested in the efficiency of contractual land arrangements such as sharecropping and fixed-rent tenancy, of which the former is believed to induce less effort as compared to the latter, because tenants receive only a fraction of their marginal product of labor under sharecropping (the so-called Marshallian inefficiency). Given the prevalence of small-scale agriculture in developing countries, the mode of contracting land and labor and thus the claim to yields from land are directly linked to welfare and poverty.

Empirically, this is commonly tested by comparing input and output intensities on sharecropped and rented plots in survey data. However, empirical analysis based on survey data may be confounded due to factors which are hard to observe and thus to measure (such as individual risk attitudes, effort, ability etc.). Taking a framed field experimental approach allows varying contracts independently of all unobserved factors and therefore to elicit the pure incentive effect of contracts. Further, the design of the experiment allows us to identify another cause for the inefficiency of sharecropping.

Measuring the incentive effects of typical agricultural contracts, the experiment employs a real-effort task resembling sorting processes that occur in agricultural production. Given that the economy in rural Ethiopia is relatively abundant in labor and relatively scarce in capital, these sorting processes are quite common. The real-effort task involves the sorting of haricot beans of different colors in a given time period. The experiment consists of 25 sessions with 20 participants each. Four contracts were randomly assigned to sessions: Wage, sharecropping, fixed-rent and ownership. The payout of the participants depended on the terms specified in the respective contract and the participant’s real-effort output during the experiment (except for the wage treatment in which the payout was held fixed for all levels of real-effort output). 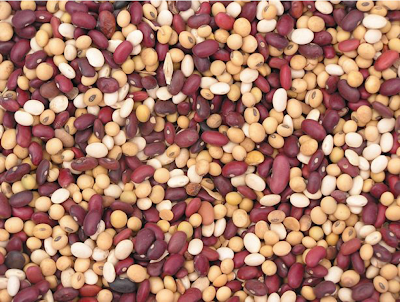 The table below contains the central findings of the paper, regressing real-effort output on the sharecropping (C2), fixed rent (C3) and ownership contract (C4) (the wage contract is dropped as a reference and therefore all coefficients have to be interpreted relative to the wage contract). Column (1), for instance, states that real-effort output is 2.8 percent lower in the sharecropping treatment than, 9,6 percent higher in the rent treatment and 7.1 percent higher in the owner contract (in all three cases as compared to the wage contract). 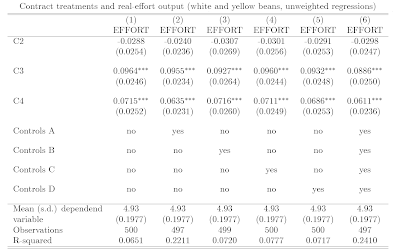 In line with basic economic theory, rent and owner contracts induce the highest real-effort. But surprisingly, real-effort output from sharecropping and wage contracts cannot be statistically distinguished. If sharecropping was only Marshallian inefficienct, it should induce more effort than the wage contract (but less effort than rent and owner contract). This implies that there must be an additional reason for the inefficiency of sharecropping.

Semi-structured interviews (carried out after the experiment) imply discontent with real life sharecropping contracts among participants across almost all study sites. To quote a typical answer:


Sharecropping is not my first preference, but the land owners force this land arrangement upon me. Because I only have limited plot size I have to accept sharecropping. (A Farmer interviewed in the Kebele Yetejan)

Regarding this, further data analysis shows that the subgroup of real life sharecroppers behaves different from non-sharecroppers in the experiment (in particular, they exercise less effort under the sharecropping and more effort under the rent contract). Real life discontent with sharecropping contracts spills over into the experiment and therefore presents an efficiency loss which comes in addition to the Marshallian inefficiency.

Niels Kemper is a postdoctoral researcher at the Chair of Econometrics, University of Mannheim, Germany. 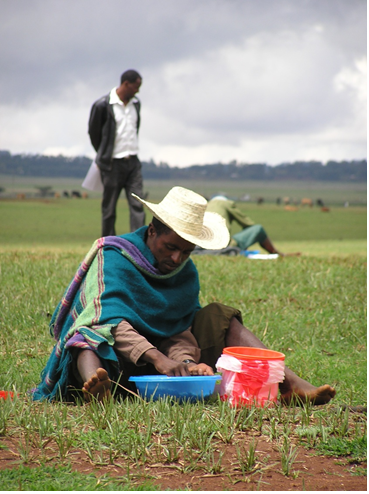