This post starts a summary of reflexions about the 10 days I stayed in Juba at the beginning of April 2012, with a group of fact finders from Goethe Frankfurt University. The facts I will present are personal views and reflect experiences just before the battle of Heglig, when the causes of the fire in Konyo Konyo market were more important in the local news than a possible new confrontation with the North.

JUBA AS A FOREIGN TRAVELER

There is quite a lot of evidence related to an increase of pro-social behavior in people affected by war (like here and here, for the opposite see here). I don't know if this is the reason, or is just that “Jubaneses” (I couldn’t really find the proper demonym) are nice, but I was amazed by how friendly and respectful is most of the people there (both locals and recent immigrants). And it was not just a funky behavior towards white men. Khawajas are just one more in the chaotic mosaic of different local tribes, Arabs, East Africans, Chinese, etc...

Of course, the city will not be nice to every eye. While the 47° that we were facing those days, right before the beginning of the rainy season, seem to calm down city’s spirit during the day, as soon as the sun starts setting, aliveness and chaos take control of the streets, particularly the days that electricity will just start working at 19:00. Is the moment for the electric haircut machines, the sound systems and the cold beers. No traffic lights yet, but many streets lights instead. And Juba’s traffic is something. I am glad I was raised in the wild streets of Santiago de Chile, always ready to play torero with the cars. No even talk of boda-bodas. I am not sure if the licensing system was really working, but SENKE daredevils were all around.

Indeed, traffic accidents were always at the top of the most important topics in the security assessments that we received. While various other parts of the country are under strict travel warning, in Juba boda-accidents, petty crime and crocodiles in the Nile were more of a concern than landmines, LRA or tribal clashes. I never felt less safe than in many cities I have been before (including various neighborhoods of Washington DC).

Yes, many expats were in some nice “safety heavens”. But we were staying besides University of Juba, not too close to the more globalized spots of the city. Here it was more a mix of students, university personnel and immigrants from neighboring countries. And this spot of the city was the restless corner of the days we stayed: a very Latin-American style students movement was the matter in public order. But still it was quite a sparkling nightlife in the area, and University Staff Club was never running out of Tuskers.

At least in my personal view, Juba is now a nice city.

You do not need any training in economics to realize that Juba is booming! Not sure if the title of the fastest growing city in Africa is correct, but it will not be a surprise.


Clearly the construction boom is not going up... it is going aside. While few red bricked buildings are on the way to be built, the construction-mania has rearly more than two or three floors. Sometimes taking the form of a fancy presidential palace, the headquerters of an NGO, a new electronics shop, a well equipped garage for Toyotas or a SENKE emergency room... Juba is spreading!

When we were landing in our Ethiopian from Addis, and I was used to the desertic landscape of the 2 hours ride, the sudden excitement of the sight of the famous Nile from the sky was more powerful than my aerial search for Juba. The lack of high buildings makes it difficult to see the city in advance, and I just had time to notice a mixture of tukuls and shacks… I thought it was a village near Juba…. but then I realized that entire new neighborhood-villages are being raised recently inside the city.

It is not clear the current number of inhabitants, but we heard estimates ranging from 250,000 to one million... but is clear that the population has at least doubled in the last 6 years.

The frantic boom was confirmed with the hundreds of trucks from Uganda, Kenya, Ethiopia and the UN, driving along with the 4WDs and SUVs, from international organizations (I am now familiar with all the logos!) and  lucky locals. A mix of international aid and private development, not necessarily well tuned together.

There was money, there was oil… but now there is not anymore. It is to be seen if the peace dividend will survive austerity measures  (and if, hopefully, peace itself will remains).

For anyone following even sporadically the North-South Sudan conflict, it must be clear that a very important part of the complicated equation of war is Arab world versus Sub-Saharan Africa. And when you are in Juba is clear, you are in East Africa.

I am not so familiar with the region, but Tanzanian textiles, Kenyan beers, Ethiopian food, Eritrean bars and Ugandan music were at home.  And the many recent migrants from these neighbor countries as well.

Even the language is evolving towards the Southeast. Juba Arabic is what people talks, but the language of Shakespeare is becoming very prominent (and was chosen as official language), and it is not too adventurous too say it will be the main language in a decade or less.

If cultural integration has been important to develop this sense of identity, it is likely that economic integration will make it even stronger. The road to Kampala is getting a lot better, and many new goods are coming from this way. And if the Lamu corridor becomes a reality, the future will look at the East more than ever.

Also in sports, like football and  basketball , cheering and hopes are more in the South than anywhere else. 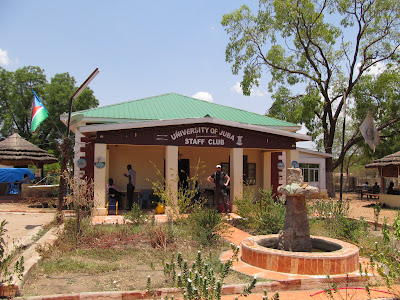