Trade at the Extensive Margin and Civil Wars in Africa

This weekend, the 2012 CSAE conference will start. Not just the best conference about anything related to economy in Africa, it is also the biggest Development conference in Europe (many people present studies about Asia and LAC as well). The keynote speakers and presenters are fantastic and the Oxford environment provides a mystic touch (also gives me the opportunity to visit Hi Lo one more time...)

I will be presenting a paper about the increase in trade at the extensive margin after the end of civil wars in Africa. My coauthor Dick Kamuganga has insider knowledge about the two main issues of the paper: he worked at the Ministry of Tourism, Trade and Industry of Uganda and also was fighting the rebels in the North.

We actually started thinking about this when writing a policy paper about trade policy in Uganda. One fact that was very striking in the trade data was the increase of Uganda's exports to Burundi, Rwanda and Sudan, all neighbors that recently had finished severe civil wars. While the amount was not too big compared to total exports, the number of different products exported was impressive. Sure, part of the story comes from re-exports to landlocked countries, but there is more that that. 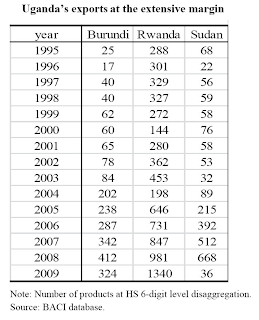 Is the increase in trade at the extensive margin a general trend in post-conflict countries? We test this hypothesis using bilateral trade data disaggregated in 5,000 products for 47 African countries exporting to 191 potential markets around the world, in a sample period of 1995 to 2009. We  first show that, after controlling for unobserved heterogeneity at the country-pair/product level, the probability of exporting a new product to a new destination is an increasing function of the years the exporter finished a war. The first years after the conflict are particularly intense in terms of new exports: 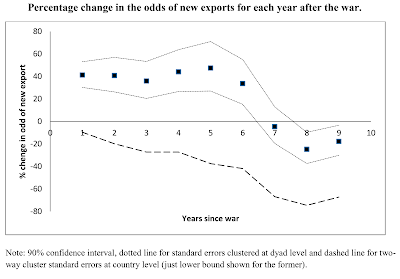 An important issue in our estimation is inference. In the paper we show different samples, defined in order to control the quality of reported data. In the less demanding specification we have around 11,500,000 observations and in the most demanding around 500,000, given our dependent variable is at country-pair/product level. With all this observations, everything we put in the regression turns out to be significant if we assume standard errors are independent. But clearly this is not the case here. We first cluster the errors at dyadic level (as most previous studies do) and still find nice confidence intervals for years after the war. Nevertheless, if we do two-way clustering errors at the country level, the intervals get really wide (but the dummies are still jointly significant).

We extend our estimation to include exports to post-conflict destinations (like the Uganda->Rwanda case), and find spillovers to neighboring countries: an increase in the probability of exporting a new product with the number of years that the destination country has ended a civil war.

We hope to be providing convincing evidence of new economic benefits of peace: export diversification and regional integration.