back to the cradle?

The last days have been intensive. Just one month ago, and under a full moon in Amsterdam I started the forth decade, a moment that I took as a checkpoint to project me in the future, review the past 3 decades, see what have I learned in 30 years walking the non-straight line of life and use past as a guide to start this new stage. I’m grateful to life that at this point I have the opportunity to ask me: what would you like to do in the next decade? and be able to perceive plenty of unexplored exciting paths.

And in this transcendent period of my life the dance of reality has decided to play one of its delightful movements. I have been transported from the mansion of ultra-rationality in Switzerland to the cradle of human foundations in Africa. Of course logic thought make essential part of the human definition, but there is a lot more: feelings, spirituality, animality, etc, to be explored and developed, and I’m decided to take this trip as a return to the source.

What am I doing here? I came to implement a survey study of network interactions among households in villages of The Gambia, as a parallel research project related with the evaluation of a Community Driven Development Project of the World Bank (we work as an external and independent counterpart - I hope so... -). Why me? The place where I’m studying my PhD has recently merged with a development institute of Geneva, and now the Economic Section has started working in issues related with the field, primarily with the hire of Jean-Louis Arcand. He has implemented several studies related with impact evaluation, mainly in West Africa, and I planning to work with this professor for the reminder two papers of my PhD.

I arrive yesterday to Dakar (Senegal), where I will stay until the Saturday preparing some necessary stuff for the trip to Banjul (Gambia's capital city). Here I met Mame Cheikh, a Senegalese PhD student of the University of Saint Louis that will be part of the project. He is a Murid, the main Islamic brotherhood of Senegal (90% of the population follow some kind of sufi order, and they are very religious, as the difficulties to find a beer can tell!!), which started in the late XIX century and is known for the fight against colonialism, the cult of work and the openness to other belief. Mame Cheikh, as most of the people in Senegal, speaks Wolof, the local main language, a skill that will be very useful in our field work, even though people in the Gambian villages speak mainly Mandinka, but most can understand Wolof as well.

OK, this is just the begining of a long, long friendship....I hope that I will have time in the future to keep this blog updated, since I feel the need to keep track of the evolution of this new adventure for myself and to share it with some of you that might be interested... a bientôt !!

In the picture: For first time in my life someone went to take me at the airport with my name written in a sign!!!... Thanks Samba 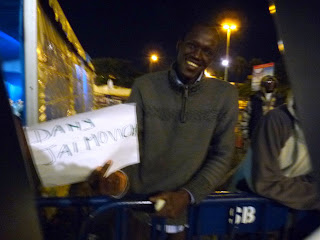