A new player in the international development community? Chile as an emerging donor

Last week I assisted to ENCUENTROS 2012, a conference for Chilean scholars working abroad in different disciplines.  For first time social sciences were included, and I have to say that the level of the presentations was generally very good, both from Chilean and international speakers (including Fosu and Klasen). On the bad side, too much emphasis was giving to things like networking and entrepreneurship, leaving aside some other important issues.

My presentation was about a policy paper I am writing with Alexis Guitierrez about Chilean international aid (a draft version can be found here). My compatriots were actually very surprised to hear that Chile is providing ODA, and that at the Latin American level the amount given is not neglectable...  is Chile a new emerging donor?

The world is experiencing the fall in relevance of the traditional powers and the irruption of emerging countries. One of the topics that have made these countries prominent is the involvement in provision of international aid. The “South-South” collaborations are on the rise. China is the better known case, but the other BRICS countries (Brazil, Russia, India and South Africa) and oil rich Venezuela and Arab countries are also part of the group of emerging donors.


Is Chile part of that group? As happens with most non-DAC  countries, it is not easy to quantify Chile’s foreign aid. No consolidated data exists and many different Government institutions independently undertake international cooperation actions. Collecting data from different sources, we have estimated that total international assistance is on the order of $16.4 million, therefore ODA/GDP is around 0.0075%. This is not only very far from the 0.7% UN target, but it is also well below the contribution of countries with similar levels of income per capita: 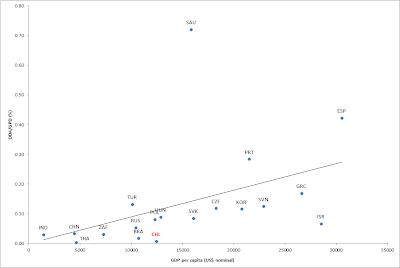 Nonetheless, at the regional level Chile’s foreign aid is relatively important. According to SEGIB, in 2010 Chile participated in 5% of the bilateral cooperation projects among Latin-American countries. Given the size of Chilean projects was bigger than the average, the country is the third most important donor (far behind Brazil and Venezuela). The SEGIB also highlights the importance of Chile in the triangular cooperation inside the region, participating in 27 of the 42 projects carried out in 2010.

Most of the ODA provided by Chile is channeled thought contribution to IOs. Roughly 80% of the international aid between 2006 and 2011 is multilateral: 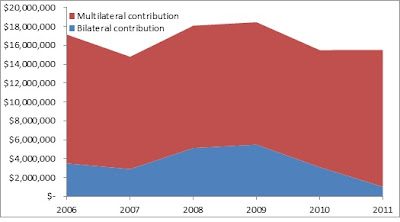 The bilateral aid is mainly provided by the Chilean International Cooperation Agency(AGCI), an agency created in 1990 with the dual mission to act as recipient and donor of foreign assistance. Given the increasing importance of the latter role, the agency was moved from the Ministry of Planning and Cooperation to the Ministry of Foreign Relations in 2005.

AGCI's action is organized into: Triangular Cooperation (with agencies like GIZ, JICA and the WFP) and South-South Cooperation (Horizontal Cooperation), that takes the form of technical assistance and scholarships:

The single most important recipient of Chilean aid is Haiti, followed by Bolivia, Paraguay, El Salvador and Ecuador.

It looks like Chile is an emerging donor... is this good or bad? Chilean society and its politicians need to define what kind of donor the country wants to be: altruistic, opportunistic and extractive? Given there is no public awareness of AGCI's work, this public debate is nonexistent, and the decisions are basically subordinated to the interests of the Ministry of Foreign Relations. Needless to say, there is not such a thing as impact evaluation of the projects, and the transparency in terms of project assignment is not exactly pristine.

Even full member of the OECD since 2010, Chile has kept its status as solely an observer of the DAC and has made no progresses towards full membership. The reason for this attitude is not clear, but there are elements to interpret it not as a strategic behavior, but probably more related to lack of capacity and budget of AGCI and other government organisms. Even tough, it might be possible that ODA is not reported to DAC in order to still be eligible for some programs in which official donors are not considered or simple because the flexibility of non-DAC donors is preferred.

The major challenges for AGCI are the adaptation to the new scenario for international cooperation, with the disappearance of the received foreign development assistance and the potential increasing role of Chile as emerging donor. AGCI has to strength its institutional capacity oriented towards the provision of international assistance in many ways. In the short and medium term: improve the report of aid statistics using international standards, transparency in the use of resources and project assignation, public awareness of activities, integration to international instances. In the long term: implement project impact evaluation, adaptation to the procyclicality of budget allocation and broader independence of the decision making process from the Ministry of Foreign Affairs.

To sum up, if Chile wants to play in the league of developed nations, its foreign assistance strategy needs to be defined, and it is better to start early enough and learn from the experiences of the 60 years of attempts from the international development community to improve people’s lives in other countries.